Arithmetic » Negative numbers & greater than and less than

1. What is a negative number?

Negative numbers are used for example with temperatures.
Below 0 °C it will start freezing and we use –1 °C, –2 °C, et cetera. 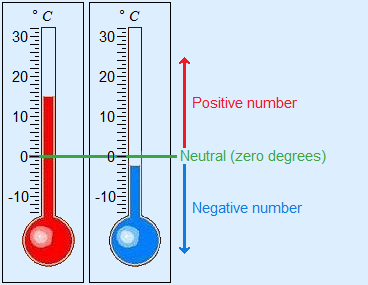 The number 0 is neither positive nor negative, but neutral.

In Belgium and France however, this is not the case.
They find zero and positive and negative.
Numbers above zero, they call 'purely' positive and numbers below zero 'purely' negative.

2. Greater than and less than

On the number line the negative numbers are to the left of zero.

Mnemonics are:
1. The direction of < and > always points towards the smallest number.
2. The < and > sign bites towards the biggest number.
3. You can change < into a K of "kleiner dan" (for Dutch students).

Do you really find this difficult?

You can try to do the examples above with a number line.