Looking for an explanation about our regular numbers? Look at decimal numbers.

The Roman numeral system is the most well-known system that is not a positional system. It is an additive system. The system has no symbol for zero and does not use negative numbers.

The original rules were that the value of individual symbols are added unless a symbol with a lower value comes before a value with a higher value. In that case the lower value is subtracted from the higher value. V, L and D are only allowed once in a number. The numbers are written from high to low.
The following rules are added later, to get an unambiguous system:
- At most three times the same symbol in succession.
- At most one lower symbol in front of a higher symbol.
And these two rules that are not always taken in to account:
- V, L and D are not used to subtract, so not VC but XCV.
- A symbol can only be subtracted from a symbol that is five or ten times bigger, so not IC but XCIX

On clocks you often see IIII instead of IV for four. The most heard explanation is that IV were the first letters of Jupiter (IVPITER in Latin) and therefore not used. An other reason can be that IV is often upside down on a clock. It may be confused with VI. The IIII also gives a certain symmetry. IIII is as wide as VIII, which is on the other side on the clock. You then also have I, II, III, IIII (= four numerals with I), V, VI, VII, VIII (= four numerals with V) and IX, X, XI, XII (= four numerals with X). 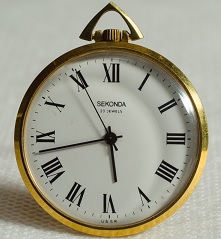 If you strictly uphold all rules, the biggest number possible is MMMCMXCIX = 3999, as you can only use M three times in succession.

You want bigger numbers?
On Wikipedia they explain two ways.

In the binary number, the value of each digit is a power of 2.
If necessary, compare this to the table for the decimal positional system at the top of the page.

To avoid confusion you can use a subscript number to show in which number system the number is written. In our example this will look like this: 100111012 = 15710.

The octal number system is a base-8 positional numeral system.
The symbols 0 to 7 are used as digits.
In (Dutch) primary schools this numeral system is sometimes taught as: 'Het land van Oct', which translates in 'The country of Oct'. Oct is sometimes written as Okt. In the country of Oct people have eight fingers so they use the octal system.
It teaches the children abetter insight into the workings of a positional system. You cannot rely on your memory anymore, but really have to use arithmetic. For this reason the teacher is also able to recognise gaps in the thinking process with the (decimal) positional system.

In the octal system, the value of each digit is a power of 8.
If necessary, compare this to the table for the decimal positional system at the top of the page.

Another variant is 'Het land van Zeek' (The country of Zeek). They have 6 fingers total and use a heximal (base 6) system. After 5 comes 'zeek' and after 55 comes 'azeka'. The number 352 is pronounced three zeek five azeka two.

The Babylonian numeral system is the oldest known positional numeral system. They worked with a base-60 (sexagesimal) number system. Luckily they did not use 60 different digits, but used an additive system in which

for 10. These symbols come from cuneiform and are pronounced as nail and hook. They used a wedge-tipped stylus to make these in clay tablets.
Example: 23 =

The symbols are grouped when there are more than three. Below you can see the numbers 1 to 60. 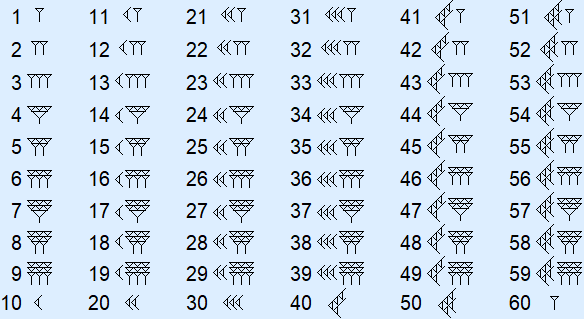 As you can see, the Babylonian numerals for 1 and 60 are the same. This is because 6010 is written 1060 in the sexagesimal system. However, the Babylonians had no symbol for zero. Therefore, only the

was written with an (invisible) space behind it. For this reason 61 is written as two nails with a space in between. You can see this in the last example at the bottom of the page.

In the sexagesimal system, the value of each digit is a power of 60.

Do you have to write a lot of Babylonian numerals?
Write a hook just as < and a nail as |.

It looks like a very difficult number system but imagine they were used to this, just like we are used to our decimal system. The fact that angles are divided in 360° and time in 60 minutes and 60 seconds are thanks to this system. Furthermore, you will see that adding and subtracting will work the same in every positional system.
One of the possible reasons 60 was chosen is because 60 has so many divisors.
It has 1, 2, 3, 4, 5, 6, 10, 12, 15, 20, 30 and 60 as its divisors.


Adding in other positional systems

Works exactly the same. Because there are only two digits, there is a higher probability you will have to carry 1.

Works exaxtly the same. If your digit exceeds 7 you will have to carry 1.

Works according to the same principal! If you exceed 9 nails you will have to carry a

First you add the number of nails in the most right hand column. There are 2 + 6 = 8 nails. Write these under the line. Proceed with the next column. Here are 3 + 4 = 7 hooks. This is one more than six, so you write down one hook under the line and carry one

Example 3: no zero makes for a confusing number!

The Babylonians did apparently not worry to much about this, probably because from the context you could always figure out the value of a numeral. They used these numerals even as 'decimals' but had no decimal separator either! There are therefore even more possible interpretations of this Babylonian numeral.
So a

Later they came up with a placeholder

for an empty space. This solved part of the problem in our result of example 3 as it would then look like this:

However they did not use it at the end of numbers. A single nail could therefore still be 3600, 60, 1, et cetera. The placeholder is therefore not a true 'zero'.

So be thankful for the zero and the decimal separator!