A quadratic relation(ship) corresponds to a quadratic formula. These formulas are often used to calculate the height of falling rocks, kicked balls or an arched bridge.
A quadratic formula is sometimes called a second degree formula.

Below you can find an example of a table that corresponds to a quadratic relation.
The corresponding formula is y = 2x2 + 1.

Below you will see two examples of graphs that corresponds to quadratic relations. The shape of the graph is called a parabola. When you have to plot the graph of a quadratic relation always show the significant points in your graph, the vertex and the intersections with the axes. It is possible there are no intersections with the x-axis.
The red graph corresponds to the table above. 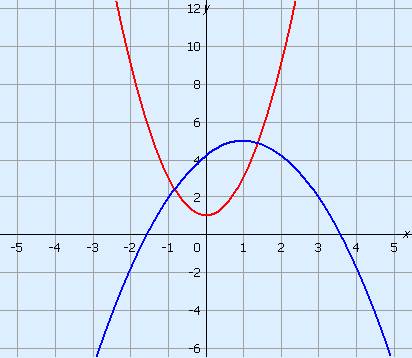 The maximum or minimum of the graph is called the vertex.
The vertex of the red parabola, that opens upward, lies at (0, 1).
The vertex of the blue parabola, that opens downward, lies at (1, 5).
The closer a (the number in front of x2) is by 0, the wider the parabola is.
The red graph is an upward opening parabola and has a positive value for a.
The blue graph is a downward opening parabola and has a negative value for a.


Now you can make a table in which all three points are covered.

Now you can plot the graph. 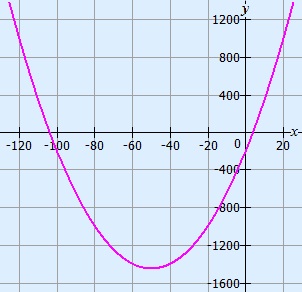 
Example 1
Of a parabola it is known that the vertex lies at (–4, 6).
Furthermore, this parabola goes through (–8, 14).
Make the corresponding formula.

Answer
There are three known points with one of them the intersection with the vertical axis, so we use y = ax2 + bx + c
Because of (0, 6), we known that c = 6.
We get y = ax2 + bx + 6.
Now we have to make simultaneous equations with the help of the other two points.


This gives the set of simultaneous equations:

I choose to use rearranging and substitution to solve the simultaneous equations, but there are other ways too. See the link above.