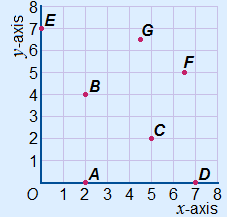 To the right you can see a coordinate system with a number of points. You always first read off the horizontal coordinate. In this case on the x-axis. Then you read off the vertical coordinate. In this case the y-axis. These two coordinates are always separate by a comma. So (x, y). If the point has a name (a capital letter) you write it immediately in front of the first bracket. Use no marks/signs between the capital letter and the first bracket.

The first five points in this coordinate system have the following coordinates:

If you have a point that is not on a grid point and the x-coordinate is therefore for example 1.5 make sure you make a legible difference between your decimal dot(s) and the comma.
You can also choose to write fractions instead of decimal numbers.
In countries where a decimal comma is used, the semicolon ( ; ) is used instead of the comma to separate the two coordinates.

The other two points in this coordinate system have the following coordinates: 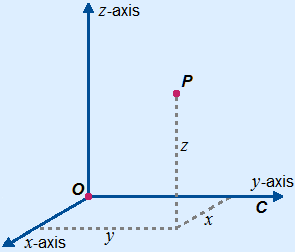 The only thing we need is another axis. This axis is called the z-axis. With this extra axis you have a xyz-system. See the drawing.

Indicating a point on the cube is done in almost the same way as in a 2D coordinate system. The coordinates are between brackets and separated by a comma ( , , ) or a semicolon ( ; ; ). 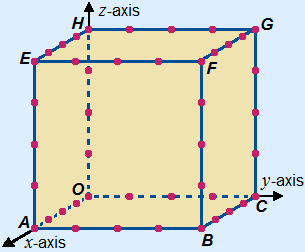 The coordinates are written in this order: (x , y , z)

A location in a plane can also be determined by polar coordinates.

As the base / reference point again we use O.
This is called the pole.
There also is a polar axis extending rightwards from the pole.

Polar coordinates have the form (r, θ).
r is the distance to the pole.
θ (theta) is the angle from the polar axis.

When the distance OA = 5 and the angle between the polar axis and OA are 54°, then the polar coordinates of point A are A(5, 54°).
From the degree symbol you can make up that you are handling polar coordinates.
Are you working with radians? Then you have a decimal number or the symbol π. 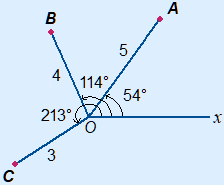 Sometimes tan-1 is written as arctan.

On the graphical calculator converting is often possible as a function.
On the Texas Instruments you have the following functions in the ANGLE menu:
R►Pr(     R►Pθ(     P►Rx(     P►Ry(

The R stands for rectangular, thus the Cartesian coordinates.
Behind the ( you have to key in the (polar) coordinates you want to convert, of course separated by a comma. 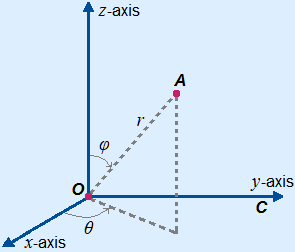 Spherical coordinates are the three dimensional system of polar coordinates.

Spherical coordinates have the form (r, φ, θ).
r is the distance to the pole.
φ is the angle between OA and
the positive z-axis.
θ is the angle in the xy-plane.

With physics φ and θ are usually swapped ...
The second coordinate is then also the angle between OA and the positive z-axis, so not a big problem.