An angle consists of a vertex and two arms. These arms make a certain angle with each other. The smaller the angle, the 'sharper' the intersection between the lines. The angle is a measurement/quantity that tells you what kind of intersection there is between two lines. When you extend the arms, the angle will not change.
The unit is degrees (°) or radians (rad).

A right angle is 90°. The two lines are perpendicular to each other.

B below is an acute angle.

C below is an obtuse angle.

D below is a straight angle.

G below are examples of reflex angles.

With the compass rose 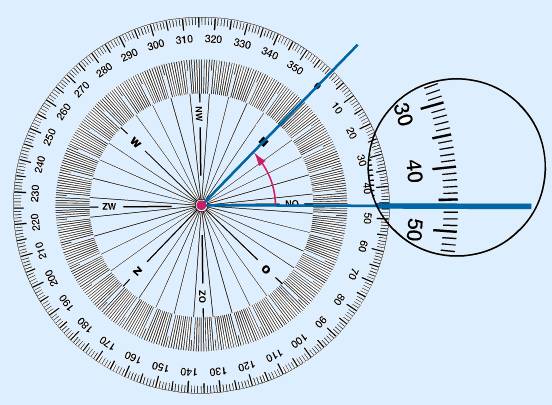 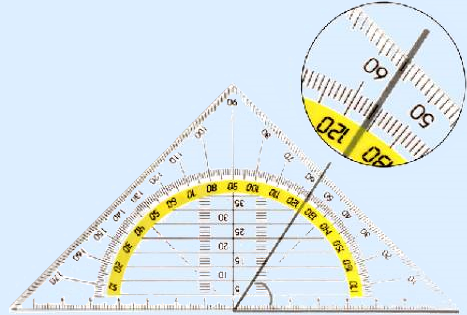 In every quadrilateral the four angles add up to 360°.

With F-angles and Z-angles we mean angles that are the same because two parallel lines are intersecting these vertices.

Example
In triangle ABC it is given that DE is a mid-parallel (so DE // AB).
It is also known that 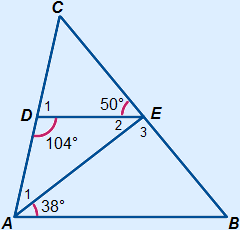 Calculate all the other angles:

Another unit to measure angles is the radian. This is the SI-unit.
SI stands for 'Système international d'unités' which you can probably guess the English translation for. Those are the standard units.

In the word radian you probably recognise the first part of radius. The unit is derived from the radius. 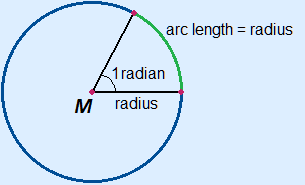 Because the angle depends on the length of the arc you have to do with the circumference of the circle. When looking at the unit circle (a circle with radius = 1) you have a circumference of 2π.
It follows that a full circle is 2π rad = 360°.
Half a circle is therefore an angle of π rad = 180°.

The calculator can often be set to calculate with degrees or radians. Press the SETUP or MODE button, sometimes you have to press more than once. You will get the option to choose between Deg(ree), Rad(ian) and sometimes Gra(dian).

The gradian is another unit for measuring angles. The gradian is sometimes called decimal degree. The abbreviation for this unit is gon. Gonia is the Greek word for angle.
It has been created by the French because you can use the SI-prefixes (e.g. kilo, deci and centi). However, the use of this unit has never become common.