1. When are two figures similar?

An enlargement is always similar to the original.
If figure B is an enlargement of A, you may assume that figure A and B are similar.

Example:
Are the quadrilaterals below similar? 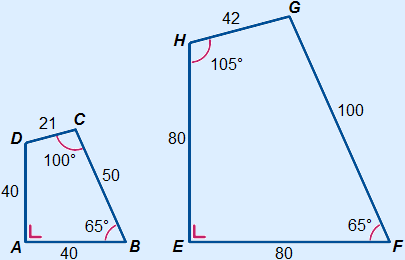 Are the corresponding angles equal?

A special case is the triangle. Because this shape has only three sides you need less information to draw a triangle. If you know one angle and two sides, you can already draw the triangle. This results in the fact that not both the similarity rules have to apply before you know that to figures are similar. If only one of the similarity rules apply, you already know for certain that the two triangles are similar.

Two triangles are similar when:

Example 1
See the figure below. 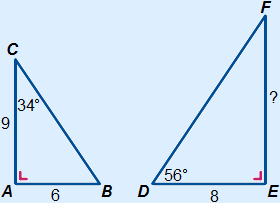 Answer:
Triangle ABC is similar to triangle EDF (letters on the same place as the corresponding angles), because:

Example 2
See the figure below. 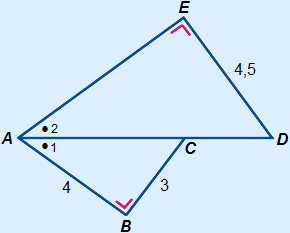 Answer:
Triangle ABC is similar to triangle AED, because:

Example 1
See the figure below.

Given is that ABCD is a rectangle.
Calculate BP.

Answer:
Triangle DQC is similar to triangle BPQ, because:

P (because of Z-angle, check angles)

Note: You can also use triangle APD, but in that case you need to solve an equation to get to you answer. See also example 3.

Example 2
See the figure below.

Given is that ABCD is a rectangle.
Calculate PS.

Answer:
Triangle APS is similar to triangle CSD, because:

PD can be calculated using Pythagoras =